Quality is Job One at Ford. It's a company catch-phrase that means a lot to Bennie Fowler. 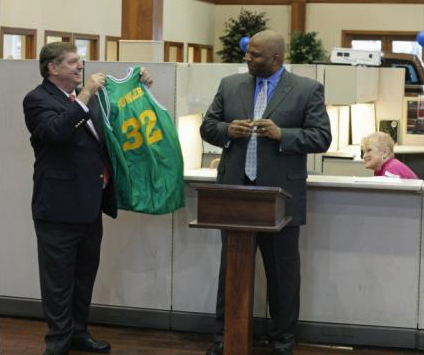 Managing the quality of Ford cars and trucks throughout the world is the job of this Augusta native, who made a homecoming Tuesday and visited an Augusta dealership.

Fowler, the group vice president for global quality and new-model launch for Ford, attended a meet-and-greet with the Bobby Jones Ford-Lincoln staff.

"Our quality has surpassed Toyota and Honda for the first time ever," said dealership owner Frank Lawrence. A lot of that success involves Fowler, he said.

Fowler was vice president of global quality from 2006 until his promotion in March 2010. He has been with Ford since 1990 and has served in leadership roles overseeing Jaguar, North American product development and engineering vice president.

"The feeling at headquarters right now is that we are dedicated and focused on Ford. We simplified our lineup, and it has really given us a great focus," Fowler said.

Unlike its major Detroit-based competitors, Ford didn't file bankruptcy and get a federal government bailout to survive the recession. Fowler said the company pulled itself up by its own bootstraps.

"We worked a lot on our product plan," Fowler said. "And I think working on getting our synergies for Ford around the world was really the right strategy for us. It is starting to pay dividends."

Ford last month announced plans to boost hiring, about 7,000 workers over the next two years.

"We're launching the new Ranger in Thailand and South Africa," he said.

Fowler will speak at Josey this morning as part of the school's Black History Month event.

The effort to improve quality at Ford

How Ford Profits from its ’24 Hour Rule’

August 15 2017
At Ford Motor Company, we’ve spent the last few years engineering a well-recognized turnaround. One of the key tools we’ve used to accomplish it is something we call the 24-Hour Rule. It’s a management practice based on a favorite...
Read More...

Pushing for quality and pushing himself

Ford Quality: Not An Overnight Sensation

February 12 2008
Automotive Design and Production Magazine Feb. 2008 By Gary Vasilash When it comes to quality, it seems as though Ford Motor Co. is on a roll. Or make that a tear. Consider, for example, the Ford Edge, which was named the leading medium...
Read More...

Bennie in the News